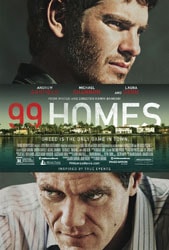 99 Homes is a distinctly American horror story. While it focuses on the predatory real estate brokers who helped cause the housing bubble, it also explores our own failings in our race for the American Dream.

Writer-director Ramin Bahrani is the first-generation son of Iranian immigrants. Perhaps this is why he is so observant of American culture. 99 Homes is different from Bahrani’s earlier films, which serve as understated portraits of the dispossessed, those finding their place in the cracks and seams of society. In 99 Homes, he turns his attention to backbone Americans—and finds them lacking.

Set in the not-so-distant past, the film captures the anxiety and desperation following the 2008 recession, when our country teetered on the brink of financial ruin. Real estate collapsed, banks folded, and hundreds of thousands of everyday people lost their homes. Predators had caused the collapse, and a new kind of predator emerged to capitalize on it. Good people made bad choices in a bid for the American dream, and many had their lives destroyed. Meanwhile, others became rich and paid no price.

The power of 99 Homes comes from its exploration of our own real failings. This is America, and few of us lack fault. The character Rick, played by Michael Shannon, delivers a line that sums up the film’s message: “America doesn't bail out the losers. America was built by bailing out winners.”