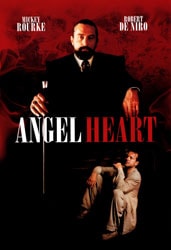 Many great actors take a turn depicting the devil in cinema. Robert De Niro, all snarl and manicured fingernails, burned his way into Lucifer legend with 1987’s Angel Heart, a Faustian tale set in New Orleans.


Many great actors take a turn depicting the devil in cinema. Robert De Niro, all snarl and manicured fingernails, burned his way into the Lucifer legend with 1987’s Angel Heart.

In this dark journey, a haunted Mickey Rourke plays Harry Angel, a private eye approached by rich client Louis Cyphre (De Niro), who needs to collect on a debt. The man seems familiar to Harry, but his memory fatally fails him. A paying gig in New Orleans is too good to pass up, so through the cracks he falls—into his own private hell.

Told most famously through bluesman Robert Johnson’s Faustian bargain at the crossroads, this is a simple story dressed with complexity.  A man trades his soul for whatever he desires, and it is never to his benefit. What sets Angel Heart apart from the rest is the filmmaking dexterity brought into the mix by director Alan Parker.

Dark in both mood and storyline, this rich picture is a horror classic. Intricate details saturate every frame, giving us a sense of what’s going on, but we only truly understand when the debts are paid and the credits roll. It does get seedy at times (supposedly Lisa Bonet was thrown off The Cosby Show for her decidedly adult turn), but these are not cheap thrills. Angel Heart is storytelling supreme, and every element of the masterful filmmaking boasts a dark, evil flourish.