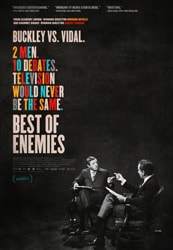 During the 1968 elections, the most recognizable faces in the country belonged not to the politicians, but to two American cultural icons: William F. Buckley and Gore Vidal. This is the story of their most notorious match.


During the 1968 elections, the most recognizable faces in the country belonged not to the politicians, but to two American cultural icons: William F. Buckley, the host of the conservative talk show Firing Line, and Gore Vidal, a prolific novelist and left-wing ideologue. The 2015 film Best of Enemies is the story of their most notorious matchup.

In a bid to cut costs, ABC decided to forgo gavel-to-gavel coverage of the Republican and Democratic National Conventions. Instead, they hired Buckley and Vidal to provide their own political commentary. Howard K. Smith was chosen to be their moderator, which was a near impossible task considering the enormous gap between the men’s political views.

Initially, Buckley and Vidal provided audiences with the most sophisticated, witty, and polite intellectual debate ever seen on live television. But things quickly took a turn for the worse when Vidal labeled Buckley a “crypto-Nazi” and Buckley hurled his own fuming insults right back at him. The debates they had were so fiery and divisive that they created the blueprint for modern coverage of political conventions.

The extreme and often comical disputes now feel shockingly prophetic. Both Vidal and Buckley were passionate about the future of America, and each genuinely feared the other’s views would lead the country to complete and utter ruin. There was no middle ground in sight, and thus passed the art of civilized debate into memory.

Documentary A Brilliant Career In the News Black and White