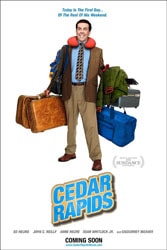 Ed Helms plays innocent and sheltered novice insurance agent Tim Lippe. When Tim is tapped to represent the firm at the regional insurance conference, he must travel to that den of iniquity, Cedar Rapids, Iowa.


Occasionally, we need a break from serious films and life’s severities. But even in search of a good laugh, we like to find a comedy that retains some respect for our intelligence.

Cedar Rapids is a sweet film. Ed Helms, chiefly known for his portrayal of Andy on The Office, plays the innocent and sheltered insurance agent Tim Lippe. Following an event that takes his esteemed mentor out of the picture, Tim is tapped to represent the firm at a regional insurance conference. This assignment leads him to the titular den of iniquity, Cedar Rapids, Iowa. Tim’s goal is to win the annual Two-Diamond prize, which is awarded to the agency exhibiting the highest moral standards.

Before reaching the conference, Tim is warned to stay away from anything remotely impure, especially his competitor, Dean Ziegler. Naturally, he meets the boisterous Ziegler, played by John C. Reilly, and we begin to realize this is a special little film. Ziegler is loud, vulgar, and outwardly immoral, but he is also welcoming and vulnerable. With this discovery, any whiff of cliché dissipates, innocence comes head-to-head with temptation, and the laughs ensue.

Cedar Rapids doesn’t have to dumb things down to win you over. The writers present us with the gift of escape, providing ample laughter and engaging our hearts all the while.