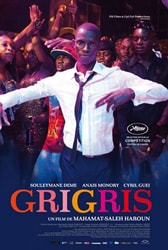 Though he has a paralyzed leg, Grigris has a passion for rhythm and a warm, beautiful soul. In Chad, where there is no safety net for people with disabilities, he dances for approving crowds to make ends meet.


Grigris, the African country of Chad’s official 2014 submission to the Oscars, does exactly what foreign films do best: share a portrait of a foreign land by telling a caring and intimate story of one of its citizens. The titular character, Grigris, has a paralyzed leg, a passion for rhythm, and an ebullient soul. Living in Chad, where there is no safety net for people with disabilities, he dances for approving crowds to make ends meet. His energy lights up the nightclubs, making him a favorite with those who ply their trades in the shadows of the night. When times are good, dancing provides, but when things go south, Grigris must turn to a life of crime to put food on the table.

“Can you swim?” asks a gasoline smuggler skeptically. “Of course!” says Grigris, who proceeds to sink like a rock. He then begs to become a driver instead. “You can drive with that leg?” the smuggler asks. But Grigris refuses to be held back by his disability, and his persistent spirit is largely what lends the movie its rough-edged grace.

Grigris is part dance movie, part crime story, and above all a very human tale of survival in a foreign land. In this hardscrabble life, we find moments of beauty, suspense, laughter, and innocent love. Grigris refreshes like a palate cleanser, and like the best of films, it leaves us wanting more.