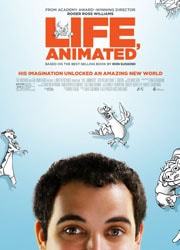 There are few disorders so misunderstood as autism. Life, Animated, from Academy Award-winning filmmaker Roger Ross Williams, delivers a much-needed, rare perspective: what it's like to live with autism yourself.


There are few disorders so misunderstood as autism. Its history is rife with debunked theories, like how it’s caused by vaccines or cold, unfeeling mothers. (Both disproven.) It’s no wonder that film has had a hard time representing autism realistically on the big screen. Though Dustin Hoffman’s role as a savant in Rain Man started a national conversation, the movie didn’t really get at the heart of what it’s like to cope with autism yourself.

The documentary follows Owen Suskind, a young man now in his twenties, who suddenly stopped talking at the age of three. Sequestered in a world of his own, Owen watched Disney films obsessively. But his obsession had a purpose: he was using the animated stories to process and make sense of the world around him. The film employs modern animation to reenact Owen’s childhood as he reflects on “finding his voice” again and what it means for film to be a refuge.

But this is no after-school special. Life, Animated handles its emotional turns with finesse, and though at times it feels like the story of a miracle, it’s also somehow profoundly ordinary.