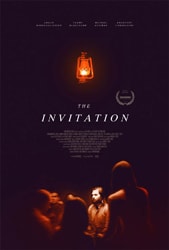 Though the film begins with a familiar setup (a group of guests are invited to a mansion, and upon arriving find bars on the windows), The Invitation quickly veers into dangerous psychological territory.


Many of the greatest horror movies started out as wildly creative, independent projects. After all, with a shoestring budget, indie directors have to rely on their imagination in order to pull off a great film. Through the years, indie horror has given us movies like Halloween, as well as a recent spate of inventive spine-chillers, several of which have found a home in our archive. Now, we can add Karyn Kusama’s The Invitation to that list.

Though the film begins with a familiar setup (a group of guests are invited to a mansion, and upon arriving find that there are bars on the windows and all the doors are locked), The Invitation quickly veers into dangerous psychological territory.

Will, our protagonist, was married to the party’s hostess, Eden, until their son’s tragic death tore them apart. Now, Will’s memories of their dead son flicker in the rooms of the house like ghosts. At first it seems like Will could be unstable, but what if there is a very real danger? Is there a sinister motive behind Eden’s invitation?

This is a masterfully controlled film, one that doesn’t deliver the traditional jump-scares, but instead, allows a feeling of unease to build and build.