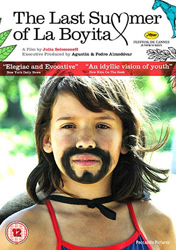 The Last Summer of La Boyita

Tender and poignant, this Argentinian film offers a fresh take on what it means to come of age into an unfair, confusing world defined by gender distinctions and tradition.


Most of us probably recall puberty with a certain sweat-inducing dread. From the weird odors to the daily embarrassments, it’s a time when you suddenly start caring what people think of you. In the Argentinian film The Last Summer of La Boyita, Jorgelina isn’t quite there yet, but her older sister Luciana is heading into womanhood at full throttle.

In their community, gender roles are full of distinctions. Boys butcher meat and compete in rodeos, while girls fawn over fashion and must sit out from swimming once a month. And in the textbook diagrams Jorgelina studies in secret, their bodies are worlds apart. But what if things aren’t so clear-cut?

What makes The Last Summer of La Boyita such a charming film is Jorgelina’s earnest naiveté. When she visits her father’s ranch, she’s surprised that Marco, a childhood friend, has to “test his manhood” in the upcoming races. “In case he doesn’t like it?” she asks, as if it were that simple. But what she doesn’t know is that Marco does have a secret, one he has—until now—shouldered alone.

Tender and poignant, this is a fresh take on what it means to come of age into an unfair, confusing world.