Beasts of No Nation: Lessons on Leadership

Leadership is a vaunted quality in our competitive society. I’ve taken high school classes on leadership, maneuvered my way into leadership roles in university, been required to take yet more leadership training in my first office job. The question “What makes a good leader?” has peppered so many of these experiences that it’s been rendered nearly meaningless. Then came Cary Fukunaga’s Beasts of No Nation.

Watching the heart-rending film gave me clearer insight on leadership than all of my collegiate and corporate training combined. The good-bad dichotomy is skillfully played with, then discarded. The leader is both terrible and irresistible, his followers blind and knowing. Leadership is portrayed as an intricate form of manipulation that cannot be simplified into a handbook of dos and don’ts.

Beasts of No Nation is set in an unnamed West African country in the grips of a violent civil war. The fact that the country is not specified steers viewers to look beyond political and historical commentary, and into the human dynamics at play. The premise is real enough without being tethered to concrete events. Ordinary people find themselves caught in between a brutal government and equally brutal rebel force. Before the violence bursts on screen—as we know it will in those first calm-before-the-storm scenes—we are introduced to one of those ordinary people: the young protagonist, Agu (Abraham Attah). He is established as a quick-witted, creative boy, pulling pranks on his older brother and talking soldiers into coughing up spare cash. We follow him as the life that he knows is suddenly shredded, then by chance falls into the hands of Commandant (Idris Elba), the battalion leader of a rebel faction. Commandant’s carefully crafted emotional sabotage gradually, yet quite swiftly, converts Agu into a full-fledged child soldier. 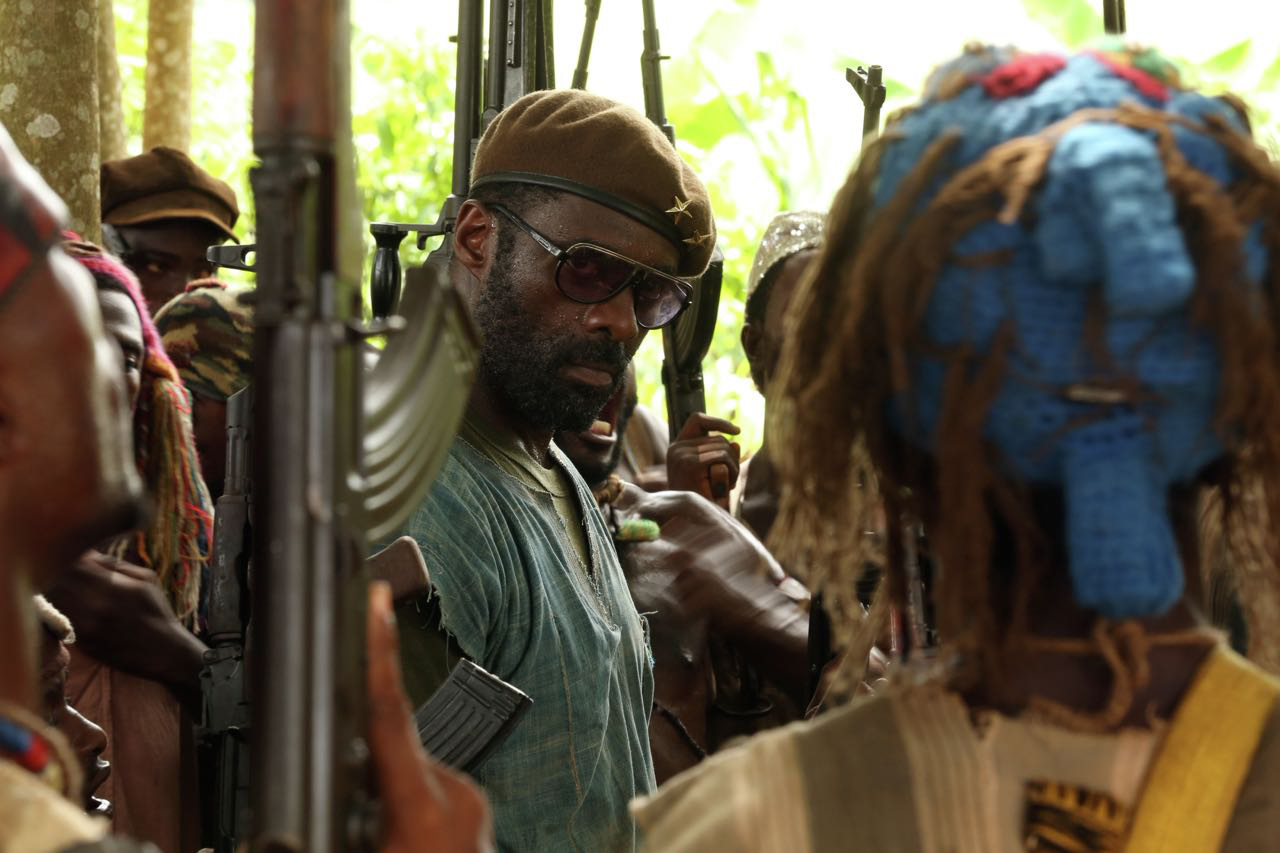 This zooming in on Agu allows a close examination of the micro-level tactics that enable Commandant to be seen by the boy as a legitimate and deserving leader. He begins by rescuing Agu, who would have almost certainly died without help. The gesture isn’t entirely kind-hearted: right off the bat, Commandant makes it clear that Agu’s survival is precarious at best. Next, a hazing ritual with eerie mystical components sees Agu come through battered, but alive. Others are not so lucky. This exclusion of some lends Commandant’s followers an air of exclusivity. Finally, he stirs up rage. “All of you that have never been listened to before and have seen your family killed,” he says to his battalion, “You now have something that stands for you. You now have something that stands for you! That is your defense. That is your family’s blood.” He bellows: “Victory?” and in unison the battalion responds: “Victory!” He closes with, “You are my family.” Perhaps this is the most sinister strategy: the way that Commandant, under Idris Elba’s brilliant control, expertly directs the rage and sorrow of his emotionally devastated battalion to inflict maximum brutality, all while inserting himself as their new patriarch.

I’ve learned from this film that a successful leader works hard to seamlessly leverage the lived experience of people, creating a worldview that effectively harnesses their deepest wells of emotion. The choice the leader makes is in deciding which emotions and experiences to draw on. Commandant’s rise is buoyed by fear, ego, and anger—and the resulting worldview is anything but pretty.