More Than Meets the Eye in the Sky

Much of the writing I have seen so far about Gavin Hood’s excellent movie on drone warfare, Eye in the Sky, praises the film’s realistic and unbiased depiction of a well-known ethical exercise called the “trolley problem.” In the exercise, a runaway trolley hurtles down a track towards five people who are tied down. They face death if the trolley is not diverted. By pulling a lever, you, the bystander, can switch the trolley to a different track and save them; however, doing so would result in the death of another person on the other track. The following question arises: should you weigh the lives of 5 against the life of 1, taking a utilitarian view, and pull the lever? Or should you avoid implicating yourself in causing someone else’s death?

Many might find themselves willing to pull the lever, perhaps even morally obligated to do so. But tweaking the circumstances a little and leaving the same possible outcomes in place can change things. Let’s say the trolley is hurtling towards the same five helpless people. But now you find yourself on an overpass. You know that a heavy weight thrown off the overpass will derail the trolley and save the to-be victims. Lo and behold, next to you is a large man. You can push him over the edge and into the path of the trolley, killing him and saving the other five people. Do you do it?

It’s an interesting exercise, and I agree that at first glance, similar ethical questions are raised by Eye in The Sky. In the movie, a capture mission suddenly becomes a kill mission when the Al-Shabaab cell being spied on begins to strap explosive vests onto a new recruit. The young drone operator in Las Vegas finds himself with his finger to the trigger of hellfire missiles, his first time having to potentially kill. Next to him sits an even newer solider, her first day on the job. Just as it becomes evident they will likely be told to eliminate the targets, an innocent young girl enters the kill zone to sell bread. We see this girl first thing in the film, spinning a hula hoop made by her father in the house next door to the cell. The family is clearly unaffiliated with Al-Shabaab, her dad even referring to the group as “fanatics.” Seeing the girl, the novice drone operators are immediately hesitant, shaken by the prospect of knowingly killing an innocent kid alongside the intended targets. But further up the military rungs, more experienced personnel have fewer qualms. Col. Katherine Powell (Helen Mirren) sees the whole thing in terms of CDE (collateral damage estimates) and hit lists. In other words, the collateral damage is low (1 girl) and the kill zone contains a treasure trove of most-wanted terror targets. 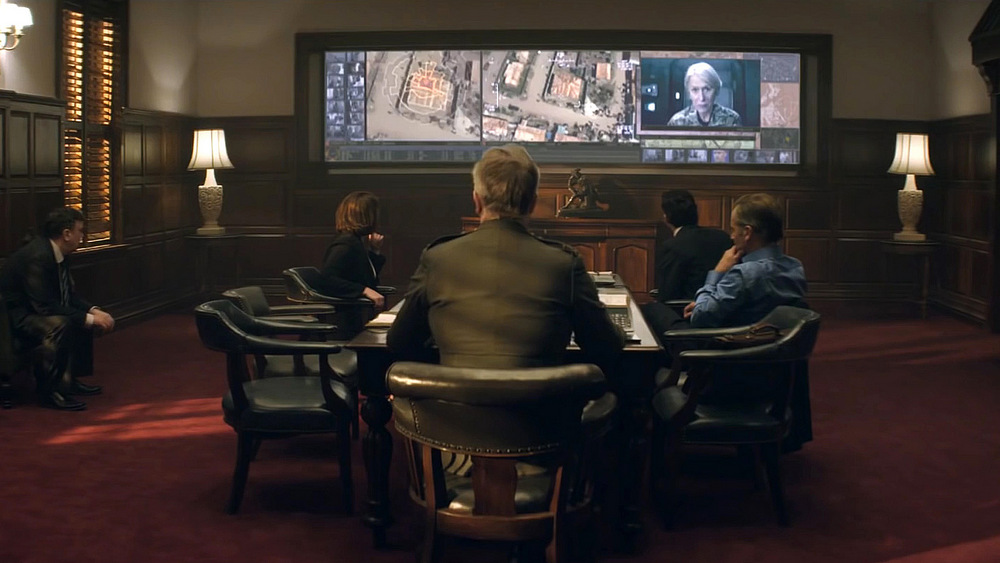 The fact that the terrorists are gearing up for mass carnage presents not only a “trolley problem” style question, but also an opportunity to advance careers by ticking high-profile targets off a list. As in real-life drone operations, much is in the grey area when it comes to killing people without fair trial and without declaration of war. Eye in the Sky expertly takes us up the chain of command as we follow the decision being thrown from official to official like a hot potato. The difficulty in deciding is again mostly a matter of careers. No one wants to tarnish his or hers with possible public backlash, should footage of a girl being killed in a friendly country be leaked. The decision-makers only fleetingly mention the possibility that the death of a young girl at the hands of morality-toting western powers might further entrench the problem allegedly being addressed with the drone strike. Shortsighted goals and individual ambitions dominate the process. What is not explicitly said, but is obvious nonetheless, is that utilitarianism cannot be applied like a science in deciding who is to die. The terror attempt could fail. The death of the girl could flair up a whole new round of terrorist recruiting, resulting in the death of far more than would be saved from the imminent terror attack. The Eye in the Sky is not all knowing.

In the end, the main point made is, in my opinion, not ambiguous. The movie is not, as some have concluded, an open-ended illustration of difficult decisions being made only more difficult by the precision of modern warfare. On the contrary, the movie is a clear condemnation. What makes it all the more powerful is its generosity by comparison with reality. The movie is generous towards the decision-makers, illustrating them as devoting ample time to deciding the life of one girl. It is generous towards the technology, giving drone cameras crisply defined images. All this makes the verdict all the more biting. Even with clarity, attention, and time, those in power do not discuss the wider consequences and moral implications—there is no mention, for instance, of deterring terror at the root. Most importantly, the only people seen profoundly grappling with the weight of killing an innocent girl, struggling emotionally and feeling deeply unwilling, are those who are new to it. They are the two drone operators and the newly promoted government official. The closing line by Lt. Gen. Frank Benson (Alan Rickman) says it all: “Never tell a soldier he doesn’t know the cost of war.” Indeed, only a seasoned killer is capable of reducing life to a cost.