The Duke of Burgundy and the Obsessive Aesthetic of Desire

There is a certain calculated decadence to Peter Strickland’s films. With only three full-length features in his oeuvre to date—Katalin Varga (2009), Berberian Sound Studio (2012), and The Duke of Burgundy (2014)—Strickland’s measured stylistic flourishes enliven his projects with an air of indulgence that is all too aware of the potential danger in lavishness. Strickland’s relishing in sumptuous sensorial stimuli, his meting out of characters’ neuroses through hyper-detailed visuals, and his penchant for a precision that is fraught with feelings of unease and mistrust fascinatingly—if not always successfully—generate microcosmic film experiences that overwhelm and undo the watcher. My first encounter with the Strickland-aesthetic, the painstakingly slow-burn Berberian Sound Studio (often agonizingly slow, but I was one of the few horror acolytes who absolutely could not stand House of the Devil, so I’m innately biased) showcases Strickland’s adroit ability to manipulate his stylistic choices in a way that allows the sonic obsessions and consequent sonic dread of his squeamishly awkward protagonist (a bumblingly wonderful Toby Jones) to engulf his audience. But where Berberian revels in imagistic tricks and the invasion of sense at the expense of narrative and character advancement, Strickland’s next endeavor, The Duke of Burgundy, brutally and uniquely examines the intensely interpersonal through vivid stylistic machinations that only serve to embellish the provocative characters in the film.

As someone who prides themselves, perhaps misguidedly, as a queer cinema connoisseur (or at least rabid devourer), I was mildly off-put that The Duke of Burgundy had not been on my radar before the film was recommended to me. And perhaps that is because Burgundy is not quintessentially a queer film, nor is it a film that succumbs to any sort of genre trappings, and thus operates as an immersion in personal dynamics and the manifestations of fetishes both internal and external. Burgundy, which manages to exquisitely balance linear diegesis and purposefully fragmented reveals, centers on a ravishingly fraught romance, structured around sadomasochistic interplay, between Evelyn (Chiara D’anna) and her older professor, Cynthia (Sidse Babett Knudsen). The use and elocution of the dominant/submissive relationship—which is brilliantly introduced in the first few scenes of action as being the entirety of the couple’s interactions, and is gradually revealed to be a construct the two have created at the behest of Evelyn—develops throughout the story in tandem with the focus on the women’s mutual rapture with insects. Evelyn is under Cynthia’s (academic) tutelage in her keen studies in the field of lepidopterology (or in non-insect-phile terms, the study of moths and butterflies), and her scrutiny of and immersion into the world of the butterflies is matched in arousal only by her submissiveness to Cynthia. 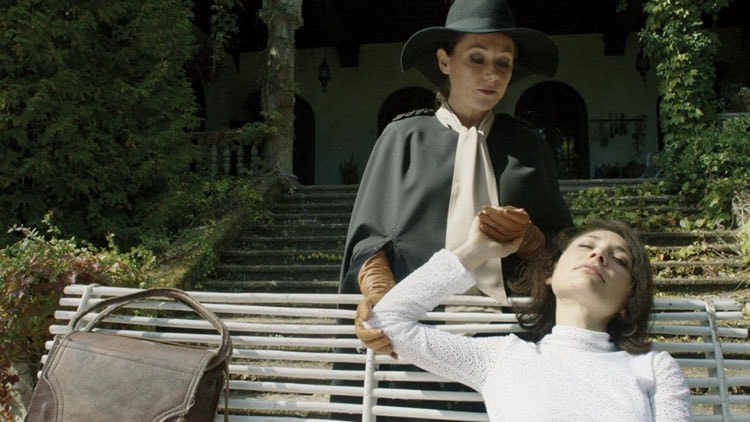 This plot construction and connection between the two female characters certainly seems as if it could easily lapse into ghettoized realms of tired and even offensive power dynamics between two women in a queer relationship. Aggressive professor forcefully seduces coy female student, the two pursue a dubiously consensual dom/sub relationship, awkward sexual politics ensue. Instead, Strickland, and the riveting women helming the project, treat the relationship with a surprising degree of delicacy and nuance. Evelyn, the audience is meant to assume, is the aggressor (or at the very least initiator) of the sadomasochistic element of their romantic relationship. Though the opulent home, money, and academic prestige belong to Cynthia, the power she exudes over Evelyn is completely constructed by Evelyn. The first auguries of this artifice present after one of the first scenes of obfuscated punishment, presumably meant to be construed as something comparable to water-boarding, in which Cynthia, revealing her true, vulnerable nature, gently asks “was that too cold?” to which Evelyn implores “the colder the better.” The brutality that Evelyn is so craven for must be completely within her own control and creation, even down to scripting the maliciousness she wishes for Cynthia to enact on her. The calculated coldness and bizarre artifice of the dom/sub relationship is in jarring juxtaposition to the tenderness shown intermittently between the two women—scenes of the two enveloped and entwined in bed; scenes of Cynthia gently caressing Evelyn as she consults her on academic work—and it is perhaps this juxtaposition that makes the reverse metamorphosis all the more devastating. As Evelyn pushes more and more for the escalation of the sadistic treatment—epitomized by her desire to acquire a wood-box to add a dimension of confinement to their routine—Cynthia grows more disillusioned and despondent with their dynamic, the aches and anxieties of her role and connection to Evelyn showing as her body and stamina begin to degrade. Antithetical to the butterflies and moths, pristine and brilliant in their elegance and their metamorphoses, Cynthia begins to unravel in the throes of her forced transitions—she abandons the wig Evelyn prefers her to wear; she discards elements of the brutish character; she begins to let her terror and genuine, conflicted yearning permeate the austere persona that Evelyn has laid out for her.

And this disintegration, this upheaval of a dynamic through the collision of characters’ contrasting neuroses, is where the beauty of Strickland’s aesthetic manifests. Strickland marvelously uses the tropes of the insect-fascination not only to subtly explicate the increasing tension between Evelyn and Cynthia, but also as a way of choreographing the politics of sex and desire within the film. To say the use of the insects in the film is a method of eroticizing or exoticizing would be a gross oversimplification of the both the women’s sexuality and the film’s intent—the study of butterflies, and the women’s mutual ardor for the insects, is a necessary externalization of the minute complexities and complicated dimensionality between the women and the structure of their dominant/submissive relationship. Moreover, and what allows the “transcend genre” moniker or its categorization as a queer film, is that Strickland combines striking visuals that mirror the compulsive fastidiousness of lepidopterology but simultaneously evoke the furious longing, disquietedness, and restlessness of desire, particularly desire predicated on some degree of artifice. Burgundy importantly never veers into the easily accessed realm of fetishizing its subjects—rather, it investigates the essence of fetish within a coupling and allows that to be a character unto itself. To aver that a modern film—or any film, really—could be compared to Bergman’s Persona would be a beyond-audacious claim that I am certainly not willing to make, but I have not found myself as unhinged and awestruck as I was during Strickland’s film.

When not considering the possible, perhaps insidious ways the characters from Quentin Tarantino's films and the characters from American Horror Story may be interconnected, Eva Phillips spends most of her time considering whether getting her second post-graduate degree is really her best bet. Eva spends an unnecessary amount of time writing about the interplay of femininity and violence as well sexuality and psychosis in film, while settling in more intimately in the surprisingly not derelict city of Pittsburgh.