The Family Dynamics of Force Majeure

A few months ago, a friend sent me an article about five people having a baby together. Half-jokingly, she suggested that multi-parenting could be a model worth considering. I tried to rationalize the arrangement; nevertheless, it struck me as complicated and weird. Weeks later, I watched Ruben Östlund’s Force Majeure. Suddenly, the tables were neatly turned on me. In a series of cringe- and awe-inducing scenes, the film demonstrated that the complicated and weird is not found in rare five-parent anomalies but, rather, hiding in plain sight.

When you think of the nuclear family, what comes to mind? A nurturing mom and confident dad flanked by eager rugrats? Matching pajamas and monogamy? In the cradle of bleach-white alpine peaks, Force Majeure takes the western family ideal and wedges its fissures wide open. Östlund’s picture-perfect family is composed of Tomas (Johannes Kuhnke), Ebba (Lisa Kongsli), and their kids Vera and Harry. Together on a weeklong vacation at a high-class ski resort, they face little, acceptable imperfections. The kids are grumpy and there are hints of an over-worked dad and under-appreciated mom. Then about ten minutes into the film, something irreversible happens. As they sit at an outdoor restaurant overlooking the beautiful mountainscape, a controlled avalanche begins to tumble down a nearby peak. Rational patriarch Tomas has an amused and educational tone as he urges his family to pose with the tame phenomenon. However, the avalanche grows larger and closer, and the shrieks of little Harry escalate to a frantic pitch just as the cloud of snow swallows everything in sight. The last thing we see is Ebba trying to lift her two children to safety as Tomas runs cleanly away. When the fog clears, it becomes apparent that the actual avalanche has not hit the restaurant and no one is hurt. Ebba and the kids drop into their seats and after a moment, Tomas slinks back with other restaurant escapees. An uneasy silence closes the scene.

The plot that follows could have easily been a compelling enough family drama. Instead, Östlund’s meticulously chiseled combination of visual, audio, and satiric elements elevate the film into a large-scale, self-deprecating revelation. The first thing I noticed was the austere land- and soundscape. Against a largely white backdrop and nearly silent soundtrack, the things that matter pop. Loudly creaking and whining resort machinery, gender-delineated pink and blue ski suits. The modern engineering and manipulation that goes into taming the mountain for a day of smooth gliding is held up as a reflection of the machinations we employ to contort ourselves into normative family roles. 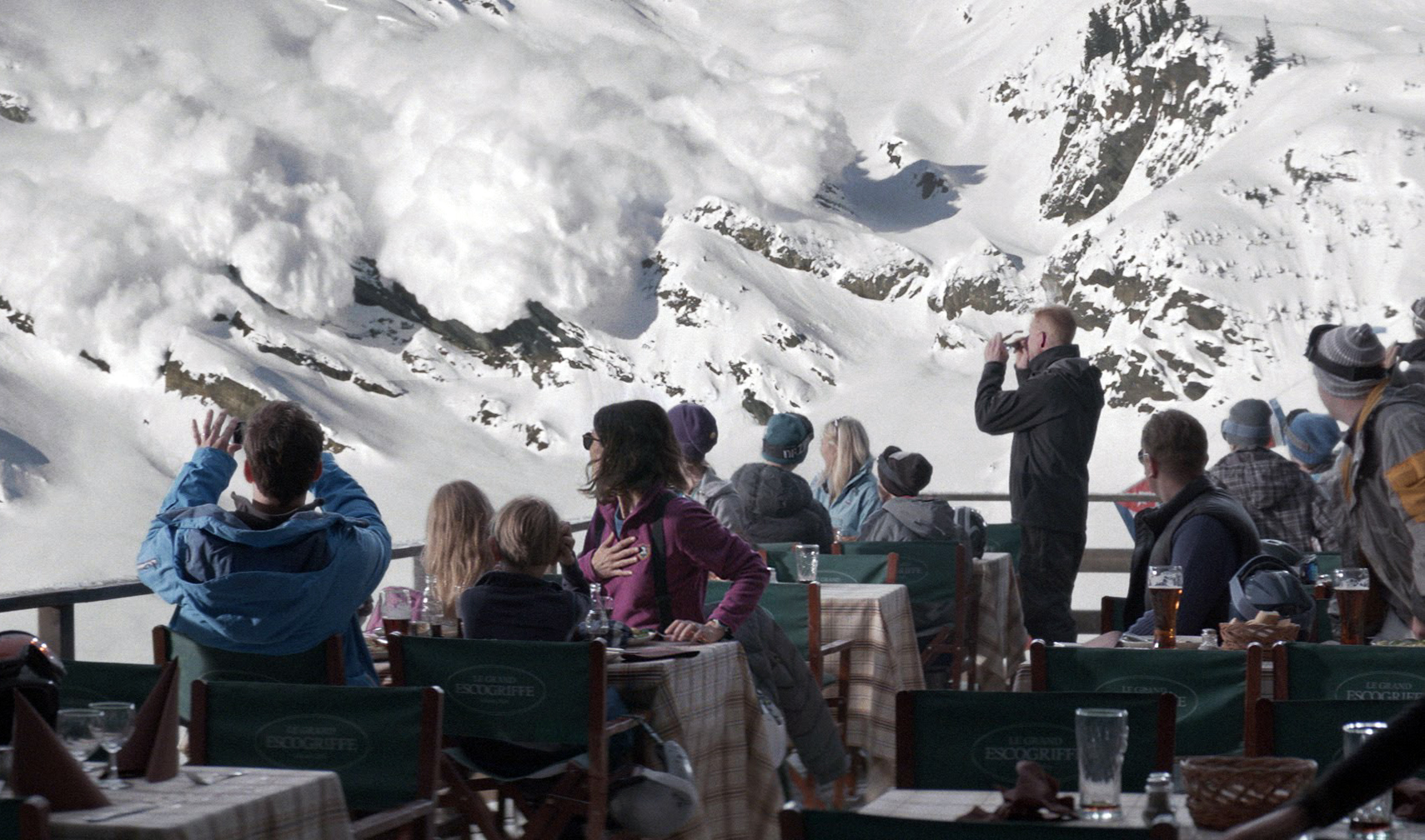 Simultaneously, it seems ridiculous to see heavy machinery and thunderous dynamite used to ensure worry-free recreation. There is a sharp socioeconomic angle to the film. We are reminded that if we didn’t have the luxury of this expensive blank canvas, the familial struggle being illustrated might be swallowed by a different set of problems. This point is also humorously made in the scenes featuring the janitor: the only character of lower income. He looks on, smoking a cigarette as Tomas fake-weeps before his wife in the hotel hallway. The couple interacts with him when they yell for privacy (in the public hallway) and when they summon him to let them into their room (which they have locked themselves out of). In these moments of juxtaposition, the woes of the privileged seem absurd.

Yet they are real woes. The two kids live in perennial fear of their parents’ divorce, conditioned to see marriage as the foundation of family. Ebba and Tomas struggle painfully to maintain their marital roles. Ebba can’t accept that her husband has failed in his position as instinctual Protector, and no amount of denial can shake her from this realization. When Tomas breaks down and admits he hates his own weaknesses (which extend beyond the avalanche to cheating at games with his kids and being unfaithful), Ebba feels no pity. She refuses to entertain any alternatives. Her friend Charlotte poses an alternative. She also has kids, but an agreement with her long-term partner gives her sexual freedom and self-worth built in roles other than motherhood and matrimony. Ebba dismisses this. Instead, she takes one final measure to reinstate the traditional roles within her family and redeem Tomas from his exposure as a human being rather than pre-programmed father. She succeeds, but the film doesn’t end there.

[slight spoilers to follow] In the final scene, they leave the resort in a bus, jerkily careening down the mountain. Terrified, Ebba orders its halt and scrambles off, followed by the other passengers. Only Charlotte remains on the bus. The crowd almost expects her demise, smartphones trained on the bus winding its way down the mountain. Yet no grizzly fate meets Charlotte. Instead, the herd of passengers is left to meander down the slope, uncertain and unhappy.