The Witch: How the Occult Got an Indie Makeover

I recently went to see Robert Eggers’s The Witch with humble expectations. Humble expectations because, in the last two years or so, a new crop of horror movies has emerged, suffused with an art-house sensibility. Indie horror films layer mood on heavy, with languid camera movements, gorgeous cinematography, and an urge to wrap their narratives neatly in psychological allegory. The only problem is, they’re not legitimately scary—I say that as a cinephile who admires directors who are not stooges for the Hollywood corporate factory churning out cookie-cutter films. Yet, the new crop of indie horror films—A Girl Walks Home Alone at Night, The Babadook, It Follows—are too infatuated with mood, sound design, and overly tidy explanations of character motives, leaving very little room for actual screams. There’s plenty to admire—the presentation is nice—but I can’t fully get on board with them because the scares are so scant.

That is why, last Sunday, I walked into the theater to see Eggers’s first feature film with my eagerness subdued, expecting something lesser or inert about The Witch. I’d seen the trailers and imagined the audience cheated on scares, or that all the supernatural occurrences would be attributed to Earthly explanations—ahem, The Village—or worse, the inner psychological imaginings of a character—ahem, ahem, another indie horror film I won’t name. What I realized within the first fifteen minutes of The Witch, though, was that it’s no period piece with zero frights, but rather a relatively traditional and refreshing horror movie.

Set in seventeenth-century New England, The Witch is about a Puritan family who finds itself in exile. Excommunicated by their village leaders, who practice an ultra-strict form of Protestantism that at any moment can call into question your religious credentials, the family and their underage children venture out into the woods to look for a new settlement. What starts off as a familial drama concerned with a lack of peer acceptance, difficulties with raising crops and feeding loved ones, and a young daughter’s puberty-related struggles and revelations quickly turns into a lurid and tense film that only amplifies the family’s dramatic struggles once the occult elements start awakening. 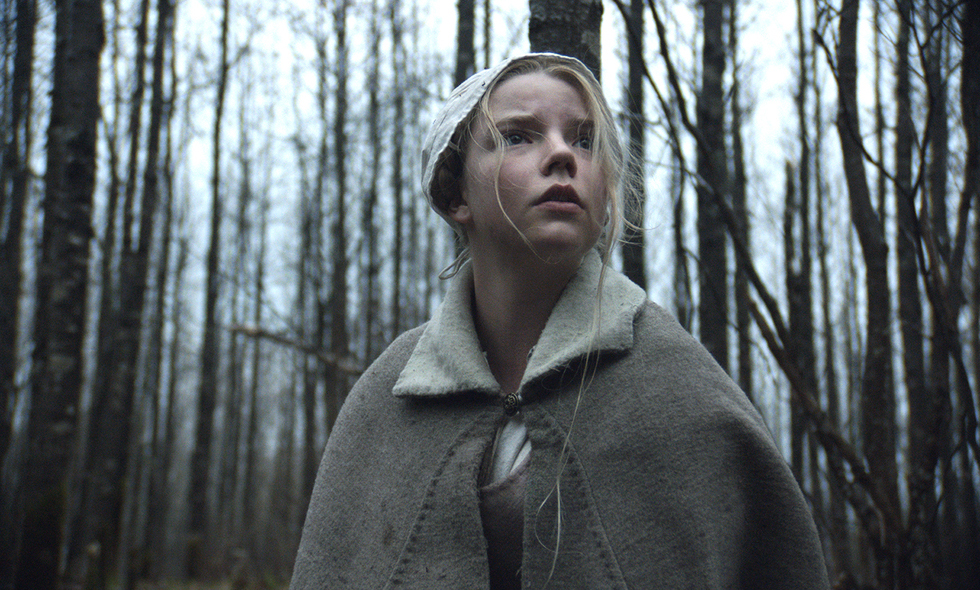 Yes, the commendable indie components are still present in The Witch—there is the sound design, for example, which reminded me of György Ligeti’s haunting choir-from-hell in the Jupiter-descending sequence in Kubrick’s 2001: A Space Odyssey. It’s almost as if the black metal group Sun O))) had been given carte-blanche to create a soundtrack of their punishing drone and distortion noise music. Then there’s the conscious decision to allow the desaturated colors to highlight how bleak and miserable conditions have become for the family. Finally, the editing in The Witch is similar to its indie-horror counterparts, relying on languid edits to create tension and mood. Most shots are on a tripod, so there are none of the shaky handheld camera movements usually found in mainstream horror movies, which unduly manufacture cheap scares from audiences.

[light spoilers to follow] What I most admired about the film, though, is how subtly The Witch starts off, hinting at the supernatural and sorcery to come, but never explicitly revealing what these “magick-al” entities are capable of until the very last sequence of the film. The entities are running the show, but how the film decides to depict a figure like Baphomet* is always merely hinted at, never shown. What’s more, the fem-centric nature the movie is important, because—as was the case with Ridley’s character in Alien—we encounter multiple lead characters interacting on screen, but not until the end do we come to the conclusion that one female character in particular has the most agency against the destructive force. Of course, due to the lack of a threatening monster with both X and Y chromosomes, the director had to find clever ways to depict Old Scratch without male genitalia and characteristics. And that’s what’s so remarkable about the movie, that the audience gets a healthy dose of drama, mixed with tangible scares and tangible demonic beings.

*In Occultism, Baphomet is a name given to a goat-headed idol.