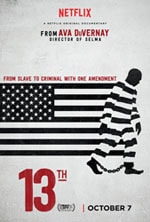 Through interviews with academics, businessmen, and politicians, along with horrific historical photographs and modern footage, 13TH contends that slavery never disappeared in America—it only changed form.


In history class, most of us learned that the Civil War ended the institution of slavery in America. The thirteenth amendment declared that “neither slavery nor involuntary servitude” should be legal in the land…“except as a punishment for crime.” It is this conspicuous loophole that award-winning director Ava DuVernay explores in her blistering documentary, 13TH.

Through a series of interviews with academics, businessmen, and politicians from both sides of the aisle, along with horrific historical photographs and modern video footage, 13TH makes the case that slavery never disappeared in America—it only changed form: First, as the Jim Crow Laws of the South. Then, as the War on Drugs in the eighties. And now, as the disproportionate mass incarceration of Black Americans.

The subject matter is difficult, but the way DuVernay has edited the film makes it impossible to turn away. There are no moments of silence, no places to catch your breath. Oblique angles and sweeping shots upset what would otherwise be the typical talking-head interviews, and hip hop lyrics punctuate the film’s segments. It is relentless in its plea for justice.

If ever there were a film that should be required viewing across America, it would be 13TH. Watch it tonight.