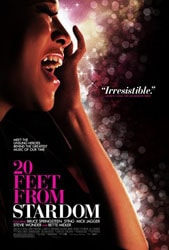 20 Feet from Stardom tells the story of the background singers who have enriched our lives without us ever knowing their names. Here, we meet the people behind these incredible voices.

Can a voice be so big, and a passion for creation so great, that stardom would only get in the way? The documentary 20 Feet from Stardom seeks to answer this question. It tells the story of several incredibly talented background singers who never receive the credit they deserve. Stuck weaving their magic behind the big-time stars who get all the credit, these voices have enriched our lives without us ever coming to know their names.

Did you know that the Crystals didn’t sing their hit song, “He’s a Rebel?” That was Darlene Love, background singer extraordinaire and uncredited ghost singer of many hits. We also learn the story of one of the most famous vocal riffs in rock ‘n’ roll history. Merry Clayton was awakened late one night by her manager, who was looking for a singer to belt a powerful hook for “a bunch of boys from England.” Those boys? The Rolling Stones. The song? “Gimme Shelter.”

Don’t begin to think that these are isolated events. The film suggests that many of the industry’s most iconic melodies originated from—and were perfected by—background singers. Sound preposterous? Trust us. The movie’s entertainment value is reward enough, but the bonus is an introduction to talents who deserve much more credit than has ever been awarded them—until now.