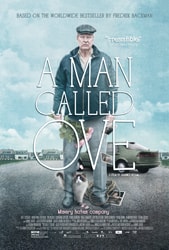 Little is left for Ove in his old age. After his wife passes on, he finds himself alone and angry at the changing world around him. But slowly, and with great resistance, he is drawn into his changing, multicultural community.


Scandinavian movies are usually quite a treat. Their beat is distinctly different, and the humor often comes from unexpected places. These quirks add up to a special experience, and A Man Called Ove is no exception.

The film is based on the internationally bestselling novel by Fredrik Backman. It perfectly captures the novel’s charms and was ultimately nominated for an Oscar for Best Foreign Language Film. Despite not going home with the statue, it has become the most famous among its contenders.

Ove Lindahl has always been a bit of a character. Raised by a similarly gruff father, he never possessed the social graces the rest of his small neighborhood does. However, he is still a man to be counted upon, and many of his neighbors—especially the Iranian immigrant across the street—befriend him for it.

Through flashbacks, we learn that Ove was once married to a woman with a radiant smile and caring demeanor. She was deeply loved, but cancer took her. Ove is left alone, aging, and angry at the changing world around him. But slowly, with great resistance, he is drawn back into a community more diverse and accepting than he ever imagined.

Subtitled Easy to Laugh Darker Subjects Based on a Book