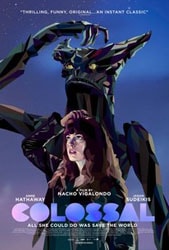 Battling an alcohol addiction, Gloria (Anne Hathaway) returns to her hometown. At the same time, a kaiju appears in a Korean city, leaving a path of destruction in its wake. Are the two events somehow connected?


Film One offers a sobering look into substance dependence and the grand-scale destruction it creates. Film Two focuses on an abusive relationship; the torture is isolating as it chips away at the victim’s self-esteem until there is nothing left to motivate an escape. Film Three is a loud, chaotic monster movie complete with kaiju, campy mayhem, and topical metaphors. Sounds like three different movies, right?

Wrong. Tremendously creative director Nacho Vigalondo was able to skillfully combine them all into one picture, fittingly titled Colossal. It’s hard to imagine finding an audience for such a tale, let alone pulling off its production, but bringing in superb performers like Anne Hathaway and Jason Sudeikis is in part what helped Vigalondo’s unique film find success.

When we enter the world of Colossal, Gloria (Hathaway) is wreaking havoc in her career and relationship with her uncontrolled partying. When her boyfriend kicks her out, she is forced to return to her hometown. There, she falls in with her grade school nemesis Oscar (Sudeikis), who is now grown, charming, and happens to own his own bar. Gloria seizes the opportunity with pleasure.

Meanwhile, a kaiju appears in Seoul, South Korea, laying waste to the city and causing panic at large. Gloria begins to recognize similarities between herself and the massive reptilian beast, and we begin to wonder: could the monster actually be an avatar of Gloria? You’ll have to check out this brilliantly original black comedy to see for yourself.