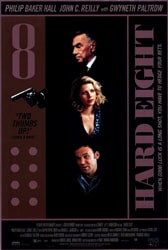 When Paul Thomas Anderson set out to make his first feature film, Hard Eight, he planned a great story within a work of art. He'd go on to make films like Boogie Nights and Magnolia, but this one still remains an early classic.


When Paul Thomas Anderson set out to make his first feature film, Hard Eight, he planned to construct a riveting story within a meticulous work of art. He undeniably succeeded, and he would go on to make hits like Boogie Nights, Magnolia, and the twenty-first century filmmaking behemoth that is There Will Be Blood.

A seemingly chance encounter brings the wise Sydney (Philip Baker Hall) into contact with John (John C. Reilly). John is seriously down on his luck, having blown his last buck in Vegas trying to win enough money to bury his mother. Over a cup of coffee and some cigarettes, Sydney offers to show John the ropes of life—and card playing.

Rather than give John the money for the funeral, Sydney teaches him how to earn a comfortable living by “working the creases” in Reno. Into the mix comes Jimmy (Samuel L. Jackson), a stylized hustler, and the sweet but tough Clementine (Gwyneth Paltrow), a cocktail waitress John can’t help but fall for.

There is a special artistry to this noir tale, which infuses each beat with an energy you can savor. The unconventional father-son dynamic brings many lessons: first, that some things just are, and later, that a “hard eight”—when you roll two fours on the dice in craps—has long odds. It’s a sucker’s bet, but the temptation is irresistible.