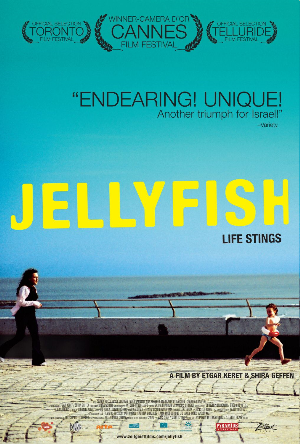 What makes Jellyfish worthwhile is how it challenges its characters with both the miraculous and the mundane. For those who love the art of film, here you’ll also find visually arresting scenes of the city and the sea.


“A ship inside a bottle cannot sink or collect dust. It’s nice to look at and floats on glass…. It doesn’t know where it’s heading.” The first time we hear these words in Etgar Keret and Shira Geffen’s 2008 Israeli film Jellyfish, we don’t fully understand what they mean.

Through the course of the film, which interweaves the stories of three women struggling to find happiness in present-day Tel Aviv, we come to realize that this ship in a bottle is a metaphor for how these women live their lives—something holds each of them back from participating fully in the world around them.

Each are given a chance to change: Batya finds a young girl who seems to walk out of the ocean, Keren and her husband meet a depressed writer while honeymooning, and Joy—a Filipina caretaker—must look after a new client who only speaks Hebrew and German.

What makes Jellyfish such a worthwhile film is that it challenges its characters with both miraculous and mundane circumstances. And for those who love the art of film itself, here you’ll find visually arresting scenes of both the city and the sea.

Simultaneously meditative and wry, this is an indie that never ceases to surprise.