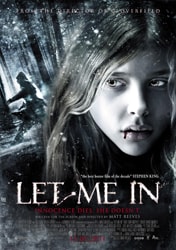 Let Me In, the 2010 remake of the Swedish vampire film Let the Right One In, undoubtedly pays homage to the original. Here, Matt Reeves creates a cold and sorrowful world from which emerges an intriguing love story.

The subtle and sensitive Swedish film Let the Right One In is already considered by many to be a masterpiece. So when the producer of the American Let Me In was asked why he would remake something so recent and so revered, his reply was telling. Knowing that the Swedish version wouldn’t gather a large audience in the States, he explained, “the brilliance of [the original] story deserves to be seen by audiences on a wide scale.”

Reluctantly, we’ll share that this is a vampire tale. But don’t let that turn you away. The filmmakers create a cold and sorrowful world suffused with muted hues and the ache for affection. From this void emerges an intriguing love story that is more compassionate than truly romantic. There is no solace here for the movie’s lonely outcasts, whether innocent adolescent or forever young. This is a story of pain, connection, and survival, and its inevitable breach of peace and safety is entrancing.

Is Let Me In a love story? Yes. A horror story? Yes. A tale of touching depth and detail? Absolutely. But we’ll let you decide if it’s a story of triumph. Whether you choose to watch the original Swedish gem or the American remake first, you’ll find that in the end, you want to let them both in.