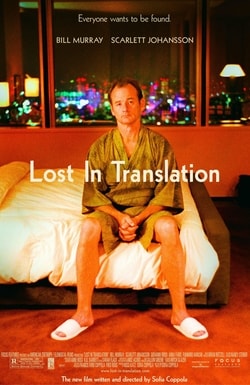 Considered by many to be Sofia Coppola’s tour de force, Lost in Translation is a moody indie set in Tokyo, with perfectly controlled performances from Scarlett Johansson and Bill Murray.


It is said that Lost in Translation began in a cloud of frustration. Sofia Coppola wrote a personal film about the fleeting fear at the center of our lives, a story true to the joyous and painful movements of the heart. When the time came to start filming, Coppola wasn’t even sure if her lead, Bill Murray, was going to show up. But her star did come, and he arrived with a deep understanding of the material.

The story is simple. Two lonely people meet in a hotel in Tokyo. Bill Murray plays an international movie star who is on location to make a commercial he doesn’t care a whit about. He is coasting, aimless, and wasting away. Scarlett Johansson plays a young woman staying in the same hotel, forlornly abandoned by her shallow husband who is off photographing a sexy movie starlet who catches his fancy.

An affair between Murray and Johansson’s characters seems imminent, but this film is about more than that. It’s about what we all fear most: the empty, crushing weight of loneliness that most of us feel deep down. But it’s also about escaping, or even conquering, that fear with a desperate sense of hope.

Bill Murray creates nuance where it counts most. Sofia Coppola tried to write the perfect line for him to whisper into Johansson’s ear, but Murray improvised something better that we never get to hear. And, in the moment, that means everything.