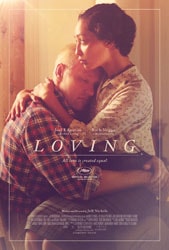 Mildred and Richard Loving wanted nothing more than to live quiet lives together. Instead, their union challenged the miscegenation laws of the time—and their case for love went all the way to the Supreme Court.


Loving v. Virginia is one of the most important Supreme Court decisions of all time. It overturned miscegenation (interracial coupling) laws across the country, finally legalizing marriage between any man and woman. At the movies, you’d expect the depiction of an important Supreme Court case like this to be a white-knuckle court room thriller. But with Loving, that’s not the case.

Director Jeff Nichols and his cameramen never even stepped foot in a courtroom during production. Instead, the artistic decision was to focus on the sensitive human story around which the court case revolved. Loving is the account of Mildred and Richard Loving, who wanted nothing more than to live their quiet lives together. They were just Virginia country folk in love, and they were punished for it.

The Lovings suffered cruelty and harassment from bigots who believed freedom meant following their bigoted rules. The worst part was that until the case made it to the national stage, the people who didn’t support their love had the law on their side. But the Lovings, patient and courageous, sought their freedom to simply love whom they loved, and through seemingly impossible circumstances they created change.

Nichols presents a fascinating and tragic portrait of lives caught in the fray of political change. He and the two leads beautifully capture the struggle the Lovings went through, and the end result is a triumph.