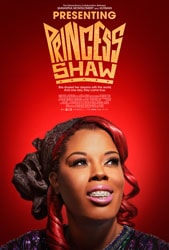 Presenting Princess Shaw is an intimate look into the life of the underprivileged and a journey into the mind of an artist, a singer-songwriter who believes in her art but faces cruel rejection.


We scour festivals far and wide to find engaging films to recommend to our community. We never know what we’ll end up with, but offbeat treasures are the lure—and the occasional reward. Such was the case with Presenting Princess Shaw, a selection at JFilm, a Jewish film festival in Pittsburgh. It is both an eye-opening, intimate look into the life of the underprivileged and a journey into the mind of an unconventional artist.

Princess Shaw is the stage name of Samantha Montgomery, a singer-songwriter who believes in her art but suffers piercing rejection. Across the world is Kutiman, a successful Israeli musician and producer who crafts haunting music by mashing up audio accumulated from the Internet. Kutiman discovers Princess Shaw online and begins to develop music based on her vocals. Meanwhile, the suspense builds as we wait for him to reach out to her with a helping hand.

Presenting Princess Shaw is equal parts anthropological study and music doc. It’s an effective, albeit strange concoction. The movie delivers chilling music from beginning to end, creating an emotional ambiance that will have you almost overly invested in the future of the titular performer.

There is a whole world of people who share the intimate details of their lives on YouTube. It’s a platform for anything from emotional catharsis to artistic experimentation, and the magical potential of such a network is shown at full force in this inspirational, true story.