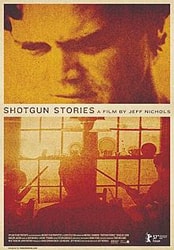 When Jeff Nichols’s first film, Shotgun Stories, hit the festival scene, it was clear that he was going to be “one to watch.”  Here was the American indie aesthetic, full of heat and humidity, simmering to a dangerous boil.


The first films of renowned auteurs are often interesting, if imperfect. Jeff Nichols brought us the celebrated favorites Take Shelter, Mud, and Loving, and he’s showing no signs of slowing down. Over the course of his career, he has developed a signature style that features slow, atmospheric, and distinctly Southern dread. Even when Nichols’s first movie, Shotgun Stories, hit the festival scene, it was clear that he was going to be one to watch. In this debut, he skillfully presented the American indie aesthetic, full of heat and humidity, simmering to a dangerous boil.

The first Hayes boys never really had a chance. Their dad left them with a mom who fed them a venomous diet of hate. Meanwhile, he moved on to start another family, fathering four more boys and teaching them to treat the first brood like trash.

When the Hayes father dies, Son Hayes (the eldest, stoically played by Michael Shannon) allows no pretty picture to hang unchallenged at the funeral. He spits on the memory of the man who ruined his own family, angering the other side and setting off a tragic chain of events. Before the quasi-ending is reached, the feudal vengeance spins out of control, and innocents needlessly fall. The only cooling breeze is an air conditioner sitting outside on a picnic table.

The somber characters and crescendo of tension pull you in, but what is most fascinating to watch is the birth of this master of atmosphere.