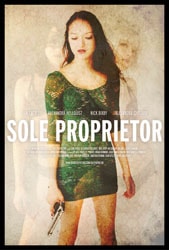 Sole Proprietor, a dark noir puzzle writhing in the gutter of hopelessness, is a crime drama written, produced, and directed by Dan Eberle, who also stars as Crowley, a burned-out CIA “dark asset.”


At the Indie Film Minute, we admire the spirit of filmmakers who simply “make it happen.” A career—let alone one stint—in filmmaking is no easy task, and when opportunities do not present themselves, we salute those who make their own luck rather than turn from the challenge.

Sole Proprietor is a dark noir puzzle writhing in the gutter of hopelessness. It was written, produced, and directed by Dan Eberle, who also stars as Crowley, a burned-out CIA “dark asset.” When Crowley wants out of the business, he seeks a new identity and a new life—and he knows how to get it. He contracts the mob to provide him with a new identity, but instead of his cash, they want him to utilize his deadly talents one last time.

While waiting for instructions, Crowley turns to the Internet for companionship. There he meets Sophie, a femme fatale with an agenda of her own. She senses that he has the skills she needs, and slowly, subtly, she pushes him to places he does not want to go.

There are twists, turns, and ugliness around every corner. And in the end, enough turns can bring you back to your start—a dangerous place to be when you’re a man like Crowley.