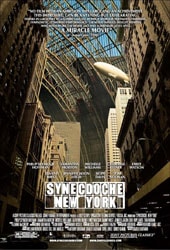 Called “the best movie of the decade” by Roger Ebert, Synecdoche, New York, ushers us into the bizarre life of theater director Caden Cotard, played by Philip Seymour Hoffman.


To call the films of the late Philip Seymour Hoffman an overture to human suffering would be an understatement. But Hoffman brought a unique vitality to his roles—he had an unflinching ability to peel back our everyday lives to expose just how strange our mundane world is.

Synecdoche, New York, writer Charlie Kaufman’s directorial debut, is no exception. Called “the best movie of the decade” by Roger Ebert, Synecdoche ushers us into the bizarre life of theater director Caden Cotard, played by Hoffman. The surreal threads through his otherwise pathetic existence: a legion of doctors lead him down a bureaucratic labyrinth of diagnoses, and his box office attendant’s house is perpetually on fire.

After receiving a prestigious MacArthur “Genius Grant,” Caden begins to assemble a cast of amateur actors and build a copy of the real world inside of a warehouse. Everyone he knows and meets, including himself, becomes a character. It’s the ultimate performance piece, and when the lines between acting and life begin to blur, we start to wonder if there was ever a difference in the first place.

Brutal, but full of moments that reveal Kaufman’s signature imaginative vision, this is a powerhouse indie that delivers on all that’s promised.