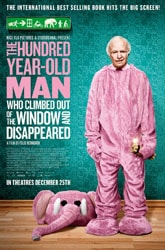 Told through flashbacks, this hilariously Swedish version of a Forrest Gump tale is the antidote to what ails you.


Scandinavian cinema has earned a place in our hearts. Its flow is unfamiliar and its humor is off kilter, but the differences it has with American film only enhance it. The 100 Year-Old Man Who Climbed Out the Window and Disappeared is no exception. It’s an entertaining antidote for whatever may be ailing you.

Allan has lived a long and lucky life. As a lonely youth, he got away with his gleeful pyromania, but in his old age he is deemed too dangerous for the public. A man like Allan can’t be kept behind bars, and he escapes—you guessed it—through the window. At the train station, he ends up with a money-filled suitcase and a criminal on his tail, and he finds himself in the midst of his next escapade.

From there, the movie begins to take shape as a hilariously Swedish version of Forrest Gump. As Allan travels across Sweden, we begin to see through flashbacks that his life has been one outrageous adventure after another. He ambles along through the past and present, leaving behind a trail of alcohol, explosions, dead villains, and altered history. By the end, we’re reminded why we credit the oldest among us as also being the wisest. Some people have truly seen it all.

Subtitled Easy to Laugh Based on a Book