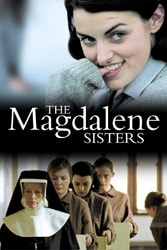 The Magdalene Sisters is a harrowing period film about women in Ireland who were sentenced to a lifetime of confined labor. Their crime? Becoming “fallen women.”


What has made societies so afraid of womanhood that they try to control it by any means necessary?

The Magdalene Sisters—which takes a hard look at this question—is a harrowing film based on the true story of women in Ireland who were sentenced to a lifetime of confined labor. Their only crimes were that they were “fallen women”; they were victims of rape, women pregnant out of wedlock, or deemed “too pretty to remain free.” As Britain’s need for labor increased, the government ensnared them for further exploitation.

Sadly, the term “confined labor” doesn’t begin to capture the horrific crimes perpetrated against these women. The film depicts real-life accounts that divulge the unabashed depravity of their captors, who made them endure far worse than just difficult work. The Magdalene Sisters could have been an escape tale (in fact there are escape attempts), but the film and its intrinsic sorrow are rooted in the claustrophobic truth that there was nowhere to escape to. Society itself, steeped in a religious righteousness corrupted by mankind’s worst vices, confined these women.