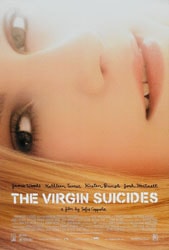 Set in Detroit in the 1970s, The Virgin Suicides is the story of five teenage sisters who suffer under the conservative rule of their parents. Its debut rightly earned director Sofia Coppola a place among the young indie elite.


As the daughter of legend Francis Ford Coppola, Sofia Coppola grew up in the spotlight. She had her first acting role before she could walk or talk—as the infant who is baptized in The Godfather. It should be no surprise that her early career was racked with cries of nepotism. Wanting to step out of her father’s shadow, Coppola turned to directing to claim her own niche in the film world.

When she debuted The Virgin Suicides at Sundance in 2000, it could have been mistaken for a star-studded teen flick, complete with a heartthrob (Josh Hartnett) and a golden girl (Kirsten Dunst). But the film—adapted from the Jeffrey Eugenides novel of the same name—is rapturous and melancholic, a true piece of cinematic art. It rightly earned Coppola a place among the young indie elite.

Set in Detroit in the 1970s, it is the story of five teenage sisters who suffer under the conservative rule of their parents. When the youngest sister, Cecelia, tries to kill herself, she explains her depression to the incredulous doctor: “Obviously, you’ve never been a thirteen-year-old girl.”

There is vivid desperation captured here. Rebellion, daydreams, kitsch, and horror: everything it means to be a teenage girl.