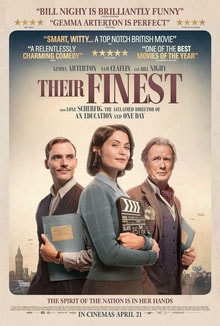 Their Finest, a British production set during the London Blitz in WWII, ushers us into the world of the Ministry of Information, a propaganda machine that housed Britain’s own wartime film studio.


If you go through our archives, you’ll find a lot of serious cinema. But filmmakers can also use uplifting, colorful stories to share their important observations. Their Finest, a British production set during the German Blitz of London during World War II, is a perfect example.

The British war effort was not only about fighting the enemy abroad; there was also important work to be done at home, like maintaining the public’s well-being and approval of the war, and a department known as the Ministry of Information did just that. The MOI was effectively a propaganda machine, and within it was a film studio that churned out strategic and patriotic messages for the war-torn populace. Their Finest, set within the MOI, is a clever and buoyant ode to the women who did their part on the home front—and it also flaunts an engaging love story.

The story may be eighty years old, but it still explores the issue of equal opportunity that is still so prevalent today. Most men were drawn into military service, and in a critical step towards equality, jobs that were previously exclusive to men opened up for women and others left out of the fight.

This charming story is populated with those who stepped forward and took their chance. Well made in every way, Their Finest avoids excessive exploitation of its serious issues and makes its points organically before ending on a high note.