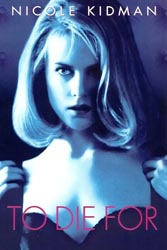 In Susanne’s mind, she will be a star. Believe it and achieve it! But here she is. Her husband’s become a satisfied, saddle-bag-laden couch potato and she a small town weather girl. Merely obstacles to be overcome!


In Gus Van Sant’s dark comedy To Die For, Nicole Kidman plays Suzanne Stone, a woman unhealthily obsessed with celebrity. From a young age, she thought what she did would only matter if someone was watching, and she has lived her life accordingly. Suzanne married Larry, the high school hunk, and became a local TV star by accepting nothing less than perfection—and she expected that the perfection would just keep coming.

Jump to the present: Larry is a self-satisfied, saddle bag-laden couch potato, and Suzanne is the weatherwoman of a small town. She is still striving but hardly thriving, and Larry is an obstacle she hasn’t yet chosen to overcome. Something has to change if Suzanne wants her former dreams to come to fruition, so one question remains: how far will she go?

Suzanne is so layered and subtle that she is at once horrifyingly real and astonishingly funny, and we must ask: who gets the credit for such an impeccable performance? Is it Kidman, the chameleon who loses herself to become a tragic monster? Or is it Gus Van Sant, the director who can instinctively understand and reveal the darkest realities present within all of us? Maybe it’s just that this is a tale based on actual events, which you’ll see is an astounding truth if you choose to watch this superb Golden Globe winner.