Halloween is, and always has been, my favorite holiday; horror is, and has always been—at least, since I was allowed to watch it—my favorite genre of film. This is all well and good, and typically results in me writing a Halloween-Horror based article. Most years, this task is somewhat remedial. This year, however, we find ourselves in the midst of what might be a real renaissance of horror films—movies that not only scare us, but also are worthy of critical examination and interpretation. That these films are coming out of the indie circuit rather than the major studio system makes this trend all the more interesting and worth examining.

I am usually loath to put dates on any particular film movement. There’s always going to be a film, or filmmaker, that doesn’t exactly conform to the timeline. For the purposes of this article, then, let’s assume that any timeline has flexibility. If we wanted to mark what could be called the original Golden Age of Horror—when films like Psycho, Halloween, Night of the Living Dead, Last House on the Left, The Birds, The Texas Chain Saw Massacre, and countless others were released—it would probably run from 1960–1982 (or, more precisely, from Psycho to The Thing). This is the period in which we get the films that lay the foundation for our modern understanding of the horror film; likewise, the wake left by these films is where we first begin to see the genre examined from a truly critical standpoint. The concept of the slasher, the final girl, and horror as critique of society emerge and are given serious consideration. (Many of these ideas are explored, excellently, in Carol J. Clover’s book on the genre, Men, Women, and Chainsaws).

After this Golden Age, repetition begins. We see slasher franchises, familiar tropes, and, most troublingly, the comfort of familiar formulas instead of exploration of new ground. Again, this is not to state that there were no good horror films during this time (Wes Craven did some of his best work as horror’s ultimate meta-commentator in this period), but here, in broad terms, things began to stagnate. This carried on through the 80s and 90s and into the early 2000s, and then something began to change. Pointing to an exact moment would be difficult—although the events of September 11th and the dawn of the Age of Terrorism wouldn’t be a bad place to start looking—but it feels like now, for the first time since that initial Golden Age (and for the first time in many of our actual lifetimes), we’re beginning to see horror movies that are charging ahead into new ground again. While it would be foolish to prematurely declare this a second major-period for the genre, we can certainly hope.

Over the past several years, we’ve gotten films like House of the Devil, You’re Next, The Babadook, It Follows, A Girl Walks Home Alone at Night, The Witch, Green Room, Don’t Breathe, a shockingly excellent Evil Dead reimagining, and the soon-to-be-released Under the Shadow, to name a few. Better yet, we have seen that some of these filmmakers—Ti West, Adam Wingard, and Fede Alvarez—are committed to working in the genre. 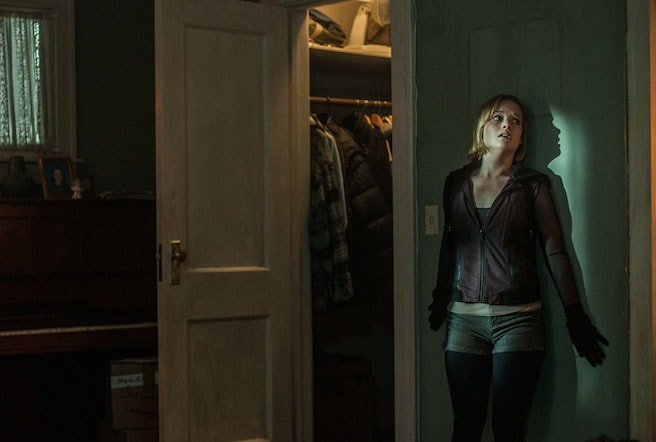 Much of what works about this new wave of horror are the same things that worked for the initial Golden Age films: the idea that suggestion and implication are more frightening than anything visual, horror derived from contemporary life, and a focus on atmosphere and tone instead of jump-scares. While those techniques and tactics fit in with the Golden Age pantheon, this new crop is also inverting some of the ideas found in those films, specifically, revising the treatment of women and gender roles, attitudes towards sexuality, and honing in on an ultimately bleaker tone than many of those early films took. Where evil was once vanquished, now it seems to conquer. Where being virginal once insured survival, now it guarantees nothing (sorry, Barb).

The questions that we’re left with are why have these new films emerged now, and why are they saying what they’re saying? The first question may be easier to answer. Not only are we living in an era of increased tension—terrorism, mass surveillance, changing (for the better) attitudes towards gender and sexuality, among other things—but also this new wave of horror has been created by filmmakers who came of age when the original Golden Age was in effect. They understand what made those films effective, and more importantly, what made them last. At the same time, they are commenting on and evolving off of that original blueprint, to tap into the modern subconscious and prod its hidden corners to scare us. Some of what these films are saying—especially in regards to gender roles and depictions of sexuality (consider the fact that the heroines of Don’t Breathe and Evil Dead are flawed in a way that, say, Laurie Strode never was)—is simply a product of a more progressive social attitude towards those topics, and a desire to invert how they may have been depicted in the past; other critiques of social and cultural life (especially in international horror films) may be parsed out through deeper research, both cinematic and historical.

What isn’t new about these films is that, much like the Golden Age films, they are being born and bred in the indie environment. In the Golden Age, the indie approach to horror was often about content as much as it was profit: all movies had smaller budgets, and studios didn’t want to waste big dollars on nasty products. John Carpenter’s Halloween and Tobe Hooper’s The Texas Chain Saw Massacre were both indies—made for around $300k each, and more importantly, without the heavy hand of the studio hanging overhead. While the independent ethos of these films allowed for certain freedoms for the filmmakers, it also carried restrictions. A small budget means that you’re always working with less. As such, every shot and scene needs to be calculated and thought out perfectly. This led to filmmakers like Hooper and Carpenter taking the approach that atmosphere was crucial, and that it was sometimes better not to show too much. Halloween goes a long way without showing much of anything; The Texas Chain Saw Massacre, though violent, leaves most of its gore to the viewers’ imaginations. We see this trend continued in the New Wave films. Consider that, for most of its brief running time, The House of the Devil is simply a girl wandering around an increasingly creaky old house. We have one early shot of extreme violence to establish that there is real danger in this world; from there, we are left to chew our nails wondering what direction it might come from. It Follows, like House of the Devil, uses early gore to set a tone, and then settles into tension and the fear of the chase. We know what fate will befall the main characters if they are caught by “It,” and therefore we don’t really need to see much more blood and guts. The stakes have already been set. The use of suggestion over certainty also places more emphasis on character. It’s terrible if we see someone get their head cut off, but it’s worse if we see a character we truly care about taken away, and can only imagine what might be happening to them. We don’t need to see too many horrible things happen; we merely need to know that they could happen to characters that we’re invested in.

This new wave of horror is also often being made on shoe-string budgets, all the more impressive now that almost every film’s cost has ballooned into the stratosphere. The House of the Devil was a $900,000 production. You’re Next cost $1 million. The Babadook clocked in at $2 million, still peanuts compared to the average production. Even those with a relatively higher budget are still working on a relatively small scale: Don’t Breathe cost just under $10 Million, while director Fede Alvarez’s earlier offering, a remake of Evil Dead, carried a seemingly blockbuster price tag of $17 million.

To compare, we’d do well to look at some of the big studio horror that’s emerged in the same period. James Wan’s The Conjuring films cost $20 million and $40 million, respectively. Guillermo del Toro’s long-gestating Crimson Peak was a $55 million dollar project. While one can debate the relative merits of those films compared to those of the New Wave, it would be extremely hard to argue that they’re bringing anything new to the table. They may be well executed, sharply directed, and hit the right scare notes for certain people, but are they giving us anything new to discuss or analyze? Even the massively successful, small-budget Paranormal Activity series, while incredibly creative in its treatment of the found-footage medium, doesn’t really have anything to say. It wants to scare us, and that’s it. That’s not a problem at all, but it does make you more appreciative of a film like The Babadook, which works as hard as it can not only to scare us, but also to draw us into conversation afterwards—or You’re Next, a relatively light affair, that still serves as a hyper-commentary on the genre as a whole. Years from now, devotees of It Follows will still be discussing the nature of “It,” and what that implies. That kind of depth just doesn’t usually exist in big studio horror fare.

Ultimately, horror serves as a referendum on what we were afraid of at a given time. This may sound like small peanuts, but it can be incredibly useful in examining what a given society, culture, or era was like. These ideas have been expounded in greater detail by myself and other writers, but they hang around because they’re true. When we look back at the current era, the 2000’s and 2010’s, the era of terrorism and mass surveillance and changing social norms, we aren’t going to look at Crimson Peak to inform us of what terrors were lurking in our subconscious; we’ll turn to It Follows, or The Sacrament, or A Girl Walks Home Alone at Night. We’ll look at horror films from other countries and cultures and see our similarities and differences reflected in them. Not all of these films will be great, or even good, but the emergence of so many horror films of such high quality at once is a hopeful reemergence of a genre too often creatively left for dead. It’s a great time to get scared.