Image Credits: Under the Shadow, Netflix

IFFBoston 2016 Roundup: In the End, They Choose You

The precise joy of the film festival—the opportunity to see multiple new films, often in some sort of premiere format, in a short amount of time—is also precisely what can make it somewhat maddening. You see so much—and so much of it is great—that some films inevitably get lost in the mix, either because you simply couldn’t fit the screening into your schedule, or because your mind was still occupied by what you just saw (or, perhaps, what you are about to see next). In a way, the films that stick out end up being more of a referendum on you, the viewer, than they are a referendum on the festival itself. The films that stick with you do so for a reason; even if you saw other films of equal or greater quality, the ones you ruminate on affect you because they hit you at exactly the right time.

Keeping all that in mind, this year’s Independent Film Festival Boston (IFFBoston) was an absolute delight (as usual), and offered a great slate of very different films, some of which I was lucky enough to see, some of which I am kicking myself for missing, and several of which had that little bit of magic to stick with me long after their moments at the festival had come and gone. This, then, will serve as a completely incomplete recap of IFFBoston 2016 (the festival’s 14th year, and my third time covering it), and will hopefully help shine a light on some of the films I loved, so that you can keep them on their radar as they begin to roll out.

One film that already has debuted (in select theaters and on iTunes, at least), is Ben Wheatley’s High-Rise, adapted from J.G. Ballard’s novel of a class struggle playing out as tribal warfare across a (you guessed it) high-rise apartment building. Ballard is a tough act to adapt, and while Wheatley’s film doesn’t plunge as deep into depravity as its source material (or as David Cronenberg’s infamous adaptation of another Ballard novel, Crash), it does offer up a free-for-all of hallucinatory visual tricks for Wheatley to indulge in. This makes the film as much a trip for us as it is for the characters trying to fight their way from floor to floor. But High-Rise is more than just visual ecstasy; screenwriter Amy Jump does a smart job of taking the relatively distant narrative Ballard created and centering it on a main character—Robert Laing (a more than game Tom Hiddleston)—so that we have a vessel through which we can see and partake in the madness. The move to a central character instead of the three viewpoints that make up the novel may be a bit disorienting for those familiar with Ballard’s work, but for the purposes of the cinematic medium, it’s the right call, and Wheatley takes the script and runs mad with it, creating a disturbingly vivid and embarrassingly enjoyable descent into madness.


Another group falls into madness in Clea DuVall’s directorial debut, The Intervention, but with much less gruesome results. Four couples plan a weekend at a friend’s house, three of them with the intention of staging a marriage intervention on the fourth couple, and calling for them to divorce. Things, of course, do not go according to plan, and, as is apt to happen, each couple learns more about their own faults than those of the two friends they’re trying to split up. The formula may be familiar, but DuVall is wise to direct it in a straightforward fashion and let the actors and a strikingly strong screenplay (written by DuVall) take over to move the film along. Indie films often fall into the dramedy category, quirky but full of heart, and at times that formula can feel so familiar that you know each beat before it comes and can predict the film’s ending from the opening credits. That doesn’t happen here, and the few times that the film does tip its hand, you hardly notice because the characters that DuVall has created are so fascinating, both in their hilarity and their deep sadness. The entire cast works well together, but Melanie Lynskey (last seen in HBO’s marvelous Togetherness) and Ben Schwartz (Jean-Ralphio Saperstein, Parks and Recreation) stand above the rest in blending their flaws with their humor, creating characters that feel almost too real, as if we’re invading their space. It’s a strong, assured debut from DuVall, and a film that does just enough to make it stand out against the familiar drama-comedy-quirk-fest that inhabits so many B-level indies. Think This is Where I Leave You, but with better acting, directing, and writing.

Another standout was the Under the Shadow, Babak Anvari’s Iranian horror film. Following a mother and daughter as they cope with growing isolation and the threat posed by Iraqi bombing during the Iran-Iraq war, Under the Shadows has echoes of The Babadook—a young mother and potentially dangerous child coping with an invading outside force—but the care with which Anvari weaves the cultural elements of Iranian society into the family’s growing fear sets Under the Shadow apart as more than a simple scare-fest. The ghosts haunting their home—Djinn, creatures of folklore as old as the Thousand and One Nights—are frightening, but equally troubling is the ease with which the mother, Sideh, is discredited and abandoned for failing to cover her head on the street, or regarded with suspicion because of her political activity during the Iranian revolution. The film does scare us—I jumped more than I would like to admit—but only because Anvari drenches us in Iran’s suffocating political and cultural atmosphere, so that we live Sideh’s increasing claustrophobia and panic along with her. One hopes that mainstream audiences are able to get past the subtitled dialogue and embrace it, because if they do, it could easily take its place alongside The Babadook, It Follows, and The Witch as one of the best horror films of the past couple years.

Under the Shadow and The Intervention were the last two films I watched during IFFBoston, and with the end of the festival, the natural reflex is to anoint a best film. The audience award went to New Zealand’s Hunt for the Wilderpeople, a movie that has been building buzz for quite some time now, but the film that hit me most was another Sundance alum, Morris from America. Again, it’s hard to say why this film made the biggest impression on me—certainly it was well made, but so was nearly everything else here. When I left the Friday evening screening, though, I couldn’t get it out of my head, and by the time Wednesday’s closing night ended, it still seemed to stand above all of the other pictures I’d taken in. Perhaps it was Craig Robinson’s sublime, low-key turn as a father trying to connect with his son when neither of them are good at expressing themselves. Maybe it was Markees Christmas’s bored stare, which seemed to combine a hundred years of loneliness with hope all at once, as if he’d seen how cruel life would be but held out a torch for love nonetheless. Or perhaps it was that writer-director Chad Hartigan, born in Cyprus, had one of the best takes on the meaning and purpose of rap music in recent memory (Straight Outta Compton notwithstanding). That I grew up worshipping music and dying to participate in it (albeit in a very different scene than Germany’s club world) certainly didn’t hurt. Whatever the magical combination was that allowed it to drive through all of the other films and latch itself onto me, Morris from America had it. 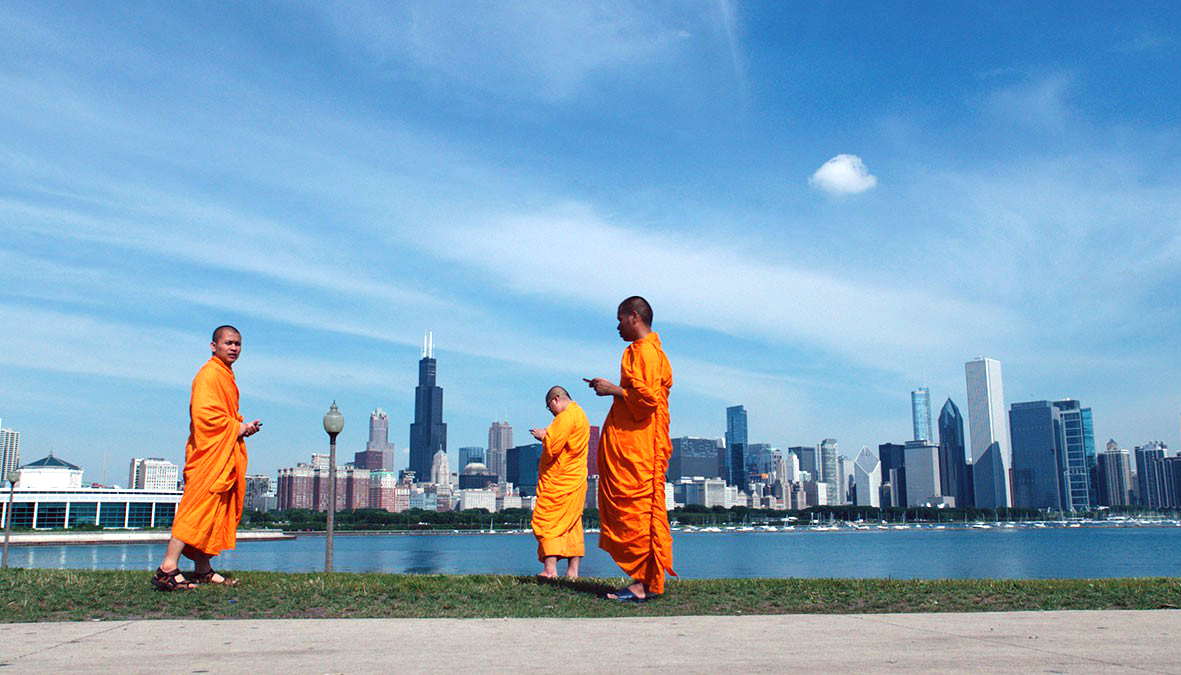 
But that’s the beauty of these events. IFFBoston’s schedule was full of winners, from Herzog taking on the internet in Lo and Behold, to low-key, traumatic horror in Eyes of My Mother. One night you see John Krasinski direct an uproariously funny film with The Hollars, a few nights later you get Ira Sachs’s Little Men, which offers a touching story through the eyes of two young best friends in the midst of gentrification. You get documentaries about the absurdity of politics (Weiner), an underground tickling competition (Tickled), and competitive stone skipping (Skips Stones for Fudge). There are slates of short films made by everyone from industry veterans to local students. You see what you can and rue the fact that you can’t see more. You take in so much in such a short time, and so much of it is beautiful and horrifying and funny and moving that you want to hold onto all of it. But you can’t, and that’s all right. The films choose you in a way, and perhaps that’s best. You can be their torchbearer and carry them to friends and family. You are offered a slate of directors and actors hoping to move you, and you get to let it all come and wash over you. That’s the miracle of the film festival; more so, it’s the miracle of small festivals like IFFBoston, where you don’t have the marquee names that light up Toronto or Venice or Cannes. Here you have the little (or little-ish) guys, and they’re counting on you to love them. I’ve been to this festival four times (three as a critic, one as a viewer), and each time I’ve fallen in love with something. Next year I plan to do the same.


Note: IFFBoston ran from April 27 through May 4 in Boston, Cambridge, and Somerville, at the Somerville, Brattle, and Coolidge Theaters, along with special events at UMass Boston. The Festival will return next spring for its 15th year, and will continue to host screenings and events in the Boston area throughout the year leading up to IFFBoston 2017.