Chi-Raq pours it on thick. It being black-on-black crime, it being America’s violent core, both on a government and civilian level, not to mention widespread misogyny and discrimination against homosexuality. Viewers know they are in for a didactic film when the opening credits create closed captioning for Nick Cannon’s “Pray 4 My City.” You don’t merely hear the intro (“This is an emergency, this is an emergency”) or the first verse:

Spike Lee’s film, the first film produced by Amazon Studios, illustrates every single word during its opening, mixing in a mosaic of the United States constructed out of red, white, and blue assault weapons. Some will avoid interpreting the film, not wanting to dig, finding it easy to avoid a deeper conversation. The scratch of the surface, though, the acknowledgement that something, an it, is not what it seems, is plastered everywhere, and the film plans to make sure you don’t continue to ignore it.

Viewers have criticized Spike’s film because of the director’s more recent turn away from commercial film, but I sense that he finds that the violent world around us cannot be ignored; Amazon may have given in to paying sales taxes in twenty or so states, but by pairing with Lee, they are now fighting for something else. Lee has recently focused on documentaries and crowd-sourced films, but Chi-Raq is merely a reminder that Lee has the authority to make any film he chooses and in any fashion he chooses. He hasn’t strayed far from his roots, though, aside from not using New York or Georgia as a setting. Flashing red letters stating “THIS IS AN EMERGENCY” is the first transition after the opening song, and it also appears at the closing of the film. This leads to stats and background information on the exonym “Chi-Raq”: “Homicides in Chicago, Illinois, have surpassed the death toll of American Special Forces in Iraq.” “Over 400 school-aged kids have been shot this year.” 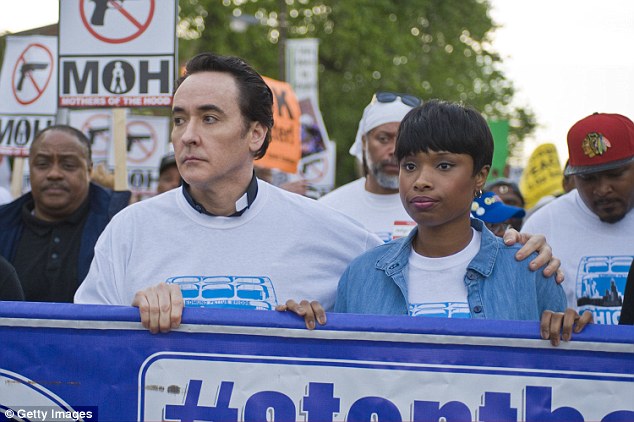 The film is aware of itself, not merely as a satire and definitely not as a belittling comedy, but in a more metatextual way; this layering makes the film rich and even more difficult to ignore. Lee’s reimagining of the Greek play Lysistrata makes the mood of the film seem light, but that’s merely the effect of rhyme scheme, a chorus, and musical moments. The dialogue makes use of rhyme and the actors successfully use cadence to deliver their lines, which allows the film to continue pushing the gravity of gun violence and the waves it causes. The film charges like a juggernaut. Samuel L. Jackson convincingly breaks the wall between the audience and characters. He may smile as he delivers his tongue-in-cheek lines and the coordinated dances may be well synchronized, but the aim of the film is not laughs or demeaning.

The casting moves back and forth between Lee’s favorites, such as Angela Bassett, Wesley Snipes, and Samuel L. Jackson, and newer personalities like Teyonah Parris, Nick Cannon, Jennifer Hudson, and La La Anthony, which is another intelligent move to guarantee the film’s traction. Lee even recruited Dave Chappelle, who hasn’t been in a film in 13 years. The Oscar nominees do their part well, but Parris and Hudson push the film the most. Nick struggles at times with more sentimental moments, but his titular character, also named Chi-Raq, certainly operates as a stand-in for those who are blind to the violence and what it begets.

Leymah Gbowee, the Liberian activist whose accolades mimic those of both fictional Lysistratas, cements the universality of the film, that violence and subsequent oppression, overt and subtle, cannot be ignored. Bassett’s character, Miss Helen, introduces Lysistrata, played by Parris, to Gbowee’s story after a rival attempts to murder Chi-Raq during a concert. Lysistrata and her boyfriend abandon their house after an attempted arson, so she alone begins to live with Bassett, and during this time, Gbowee’s story is introduced. Once Lysistrata recruits her closest friends and the significant others of the rival Trojans, Lee begins to segment his film with fictional protests taking place on every continent. Miss Helen quickly convinces Lysistrata that their cause is real, and even though this brevity doesn’t come across as realistic, the support seen on the larger level is quite sincere. She struggles to gain male participants, and eventually even her teammates flatline, but by this point, she’s taken over a local armory. The issues of violence the film explores are universal and global, national for sure, referenced by other city names like Killadelphia; Bodymore, Murderland; and Bucktown, Brooklyn, NY. The goal here definitely isn’t division, even though that is often the result of a black film or focus. The goal is more accurately described as recognition and action.

Jeffrey W. Peterson currently teaches English composition at the University of West Georgia while also mentoring their English Education interns. He received a BA from West Georgia and a MFA in writing from Sarah Lawrence College. He is also the poetry editor for Madcap, a semiannual online journal of literature and art, and executive director for ALLIANCE Drum & Bugle Corps, an all-age drum corps based out of Atlanta, GA.