The Internet’s Own Boy

By some estimates, the average American spends between 8 and 10 hours a day consuming media. When I saw this statistic, it seemed impossibly large—it excludes time spent working at a job, talking on the phone, or sending text messages, and so accounts mostly for the attention dedicated to media such as TV (which still dominates), radio, and the Internet (which is growing in share). The bulk of our free, waking hours are spent absorbing shows, movies, news, and radio, all while these mediums are increasingly becoming digitized. If the trend holds, soon enough, the majority of our non-working hours will be spent online, where all of this content will live. It is not very surprising then that a tooth-and-nail fight is currently underway over the right to reap profits from this space. But if you zoom out and look at the larger picture, there is a struggle of greater proportions taking place. What’s at stake isn’t merely traditional monetization models, but the kind of society we (and for the first time, “we” in a global sense) are shaping up to be.

If there is one story that captures the essence of the inflection point we teeter on, it’s the story of Aaron Swartz. Brian Knappenberger’s documentary, The Internet’s Own Boy, takes us through the short but eventful life of Swartz—from his early years as a prodigious child applying “question everything” as far more than a banal laptop sticker, to his sale of Reddit at age 20, and through the activist years that ultimately contributed to the government charging Swartz with 13 federal crimes that carried a maximum penalty of 50 years imprisonment and $1 million in fines. The narrative is driven by emotionally loaded interviews with family, friends, and especially the testimonials of people like Tim Berners-Lee, inventor of the World Wide Web, and Lawrence Lessig, a Harvard professor and founder of Creative Commons. When Berners-Lee and Lessig address the camera, they seem to momentarily gravitate outside of their current institutional roles. You get the sense that they’re mourning not only Swartz, but also the diminishing possibility to move things in the right direction. As the documentary goes on, you start to see why. “Aaron was trying to make the world work,” says Berners-Lee. “He was trying to fix it.” But obvious as it may seem, the odds were stacked against Swartz, and against anyone else without a vested interest.

In late 2010, Aaron Swartz logged into the MIT computer network and began bulk-downloading academic articles from JSTOR (a digital repository for academic knowledge). The Internet’s Own Boy frames the grainy footage of this moment with crucial context. We understand that MIT, rather than approaching Swartz directly, decided to quietly continue filming him for days. In other words: the university actively gathered evidence in anticipation of future litigation. At the time, Swartz was a fellow at Harvard’s Research Lab on Institutional Corruption, and his activism had turned to topics like healthcare and financial reform. But years earlier, he had published the widely-circulated Guerilla Open Access Manifesto, which laid out the case for lifting pay walls and barriers to digital information sharing. The focus was on the gatekeepers to academic knowledge: “Want to read the papers featuring the most famous results of the sciences?” writes Swartz. “You’ll need to send enormous amounts to publishers like Reed Elsevier.” Indeed, despite much grumbling and seven years, this hasn’t changed: Academics produce research using public funding; the research is published in prestigious journals (which not only do not pay academics for the work, but also do not pay them for performing the crucial peer-review process); and these same journals then turn around and charge everyone—the public, libraries, universities—outrageous fees to access that research. The only thing that truly threatens this absurd arrangement are illegal efforts to subvert it, such as Sci-Hub1. Despite the glaring contradictions in this setup, federal prosecutors decided to “make an example” of Swartz. The other big institutions at play—MIT and JSTOR, both supposedly committed to spreading knowledge (i.e., MIT’s mission statement: “bring knowledge to bear on the world’s great challenges”)—stood by in silent “neutrality.” As the documentary aptly points out, at a time when President Obama dined with the architects of the largest financial meltdown in our lifetime—bankers who faced no criminal charges—a twenty-four-year-old activist whose stated intention was to make publicly funded knowledge available to the public was the chosen target of our legal system, on grounds of redressing “commercial damage.” Swartz’s Open Access Manifesto said: “We need to take information, wherever it is stored, make our copies and share them with the world.” 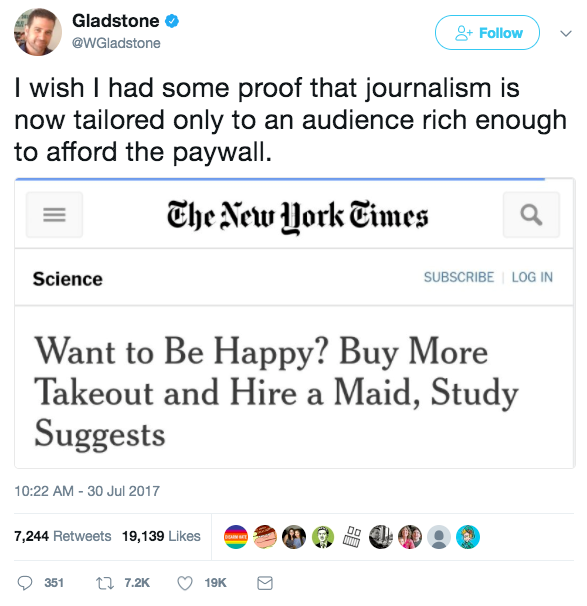 And that, in a nutshell is the larger picture presented by the documentary. It is fairly straightforward. Artificially slowing down the spread of ideas, knowledge, and creative work—basically, anything that the digital age has made easy to duplicate and share almost infinitely at no extra cost—is counterintuitive. That we’re able to share a film or news with anyone in the world with an Internet connection is not the problem; it’s an incredible advancement. The problem is that the current business model, or indeed our larger economic system, forces us to avoid using this capability to its fullest. Writers, independent film directors, musicians, and journalists have to make a living, after all. But what would the Internet look like today if Tim Berners-Lee had been in a tight financial spot and decided to patent the World Wide Web instead of making it freely available to everyone? Well, the Internet would still exist, but its landscape would likely be nothing like what we have now. It would have been limited to walled gardens, with legal fights flaring over attempts to expand it into larger, web-like openness. As with Aaron Swartz, perhaps our very own government and elite universities would have collaborated to protect commercial interests at the expense of progress. How much longer would it have taken us to reach the level—in terms of innovation, exchange, amd communication—that we stand at today? How much are we delaying our progress by artificially restricting access now?

One of the first scenes of The Internet’s Own Boy shows Aaron looking straight into the camera, blinking frequently the way someone who has stared at a screen for too long does. “Growing up, I slowly had this process of realizing that all the things around me that people had told me were just the natural way things were, the way things always would be, they weren’t natural at all.” He says, “They were things that could be changed, and they were things that, more importantly, were wrong and should change, and once I realized that, there was really no going back.” Part of the furtive truth captured by the documentary is a sad one. Aaron’s story is devastating because it is unique: the world isn’t brimming with people willing to drop everything to fix it. But in the end, The Internet’s Own Boy gathers the shards of this reality into something relatively hopeful. People can be both inventive and cooperative. So much so that we may soon invent our way out of 50% of jobs (with the help of publicly funded research, of course). Rather than crack down on the exchange that’s making this possible, it’s time we invent and implement new resource-allocation structures—basic incomes, cooperatives, human rights for all—that will enable us to better make and share the creative output that already captures most of our waking hours.

1 Sci-Hub has built a cache of open-access academic articles (from closed-access journals) so large that it now has “almost every paper a scientist would ever want to read” and can quickly fetch those it doesn’t have. Is it illegal? Completely. But according to researchers, legal challenges are “basically generating free advertising for Sci-Hub.”